Bump...and watch your opponent's driver fly through the air!

Get ready to send your opponent flying with the Bump 'n' Chuck RC Bumper Cars from Kid Galaxy. These futuristic bumper cars race around each other with remote control technology, and when they collide, drivers are ejected right out of their seats. Prepare yourself for a fierce competition between team orange and team blue! 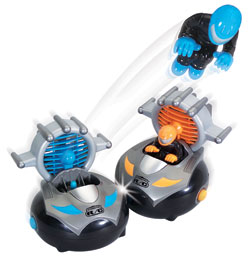 Hit your opponent's car straight on or sideswipe it and watch his driver eject or "chuck" through the air. View larger.

The Bump 'n' Chuck Bumper Cars have a sleek, aerodynamic design that adds to the intensity of their races. This look begins with the drivers. Each driver is seated in a color-coded car (orange or blue), and wears a black full-body suit with an orange or blue helmet, gloves, and shoes.

Each remote controller has two different levers--the left side controls the movement of the car, and the right side controls the movement of the working fans on the back of each car. The joystick abilities on each remote controller are fairly sensitive, giving players strong control over the direction and agility of their cars. Functioning, manipulable fan vents give the illusion that the cars are actually powered by wind.

Bump the Cars to Eject Your Opponent

Each of the round cars has a set of two orange or blue buttons on either side. The object of the bumper car game is for the players to bump their opponent's buttons to send the drivers flying from their seats.

Once the buttons are bumped, a driver is ejected from the car seat and a sound chip is activated. The car sounds a cackling cry to announce that there is a victor in the game!

What's in the Box 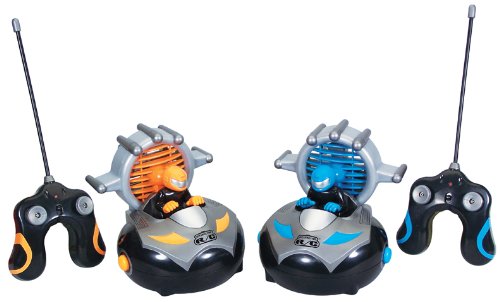